Another Month, Another Cocktail 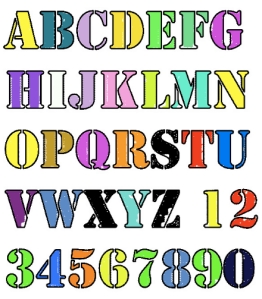 For me, 6’s are yellow, K’s are pink, and Mondays are green. I also recently decided that August is the month best suited to mojitos.

In a psychology class I learned that people with grapheme-color synesthesia perceive individual units of written material as being associated with a certain color. This sounded just like me, but I didn’t know whether the colors I saw were mere whims or permanent mainstays of my mind. I formed two lists, thirty days apart, writing down the colors I associated with every letter and numerical digit. I compared the lists later and saw that the colors lined up exactly.

I tend to have either no interest in a subject or all the interest in the world. I became utterly obsessed with synesthesia, though I shared my passion with no one, as I thought it would be too weird and self-indulgent for anyone to understand. I colored in a Synesthesia Alphabet and invented a Synesthesia Calendar with the dates written in the correct colors. My months have always had colors as well, but I had heard of other synesthetes’ months having distinct personalities. I decided to craft ones of my own. I made lists of things that interested me: Greek gods, fantasy worlds, colors, fictional characters, meals, and more. I assigned the items in each list to the months I felt fit them best, say, Artemis to October and Apollo to June. The months’ personalities slowly took form.

As part of my obsession with the months, I assigned an alcoholic beverage to each one and made sure to imbibe accordingly. Having a Bloody Mary to celebrate the first of June was divine. And a gin martini with lemon in April? Nothing better. I felt like I had stumbled upon a peculiar form of mindfulness, that is, appreciating the present moment.

Mindfulness is especially challenging for me in February. To be mindful in February is to appreciate the terrible things that make it so februaryish: frosty winds making moan and earth standing hard as iron. Its bleakness is very difficult to accept, especially when I want it to be April when the trees are in bloom and the gray snow lining the streets has melted away.

And yet I see my Synesthesia Alphabet as perfect, even when the colors are ugly. I have already  accepted that the teal color of Y is very whyish. The pale green of L is very ellish, just as short days and sleet are very februaryish. When I accept the februaryish qualities of February the same way I accept my T’s teeish red and Thursday’s thursdayish violet, I feel more mindful and therefore more content.

Try inventing your own sort of synesthesia to see what “fits” the time you are in. I’ll raise my ginger tea to whatever drink, alcoholic or not, you deem most februaryish.

10 thoughts on “Another Month, Another Cocktail”